‘Chat a While’ Bench launched in Braintree to combat loneliness 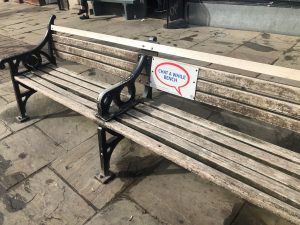 A bench in Braintree has become a Chat a While Bench to encourage residents to speak to each other in an effort to combat loneliness.

The bench, located outside Nat West bank and Mack’s Barbers on the High Street will aim to get people talking after Age UK research revealed that wards within Braintree were at the highest risk of loneliness.

The relative risk of loneliness was determined by looking at 32,844 neighbourhoods across the UK from 2011 census records, looking at factors such as marital status, self-reported health status, age and household size.

The bench was inspired by similar schemes across the country and ‘Buddy Benches’ in schools, and the hope is that it will get the people of Braintree talking.

Community figures such as PCSOs, Essex Fire and Rescue, councillors and community officers will also be making appearances as guest chatters to educate people of the many activities and events available within the district to meet new people such as Meet up Mondays.

“Loneliness is a key issue for the Council and we want to do what we can to help combat it and make people aware and able to access the many free and low cost activities we have for people to socialise in the Braintree District.

“The Chat a While Bench is one of the easiest and most accessible ways for people to feel like they have a safe space to talk to others in the community and not feel so alone. We really hope the people of Braintree take this under their wing and make it their own.”

“It’s a good idea to encourage some friendly chat. Even if it’s for a few moments it can change someone’s day.”

The bench launched Monday 9th September, if the scheme proves successful, it will be extended to other areas across the district such as Witham and Halstead.

Find out more about events and social clubs in the Braintree district area.

We use cookies to ensure that we give you the best experience on our website. If you continue to use this site we will assume that you are happy with it.Ok